Pain & Neurology Specialists is excited to announce the addition of Matthew Ried, PA-C to our provider team!

Matt received his Bachelor’s Degree in Biology from the University of Dayton in Dayton, OH. He then went on to pursue a second Bachelor’s Degree as well as a Master’s Degree through the very competitive Department of Defense Interservice Physician Assistant Program (IPAP). This program was completed through the University of Nebraska Medical School where he completed rotations in 10+ specialty fields. Matt joins us following 8 years of clinical experience in the military treating our active service members with experience in the fields of trauma, emergency, urgent care and general medicine in both civilian, military and deployed environments.

Matt is now seeing patients full-time at our Columbia location. Our practice is happy to have him as a valuable resource offering patients knowledgeable care and increased availability.

Traumatic Brain Injury (TBI) are the result of a blow or jolt to the head that can have varying effects for patients. Brain injuries can happen during many different situations such as sports activities, car accidents, and even a fall. There are many different types of brain injuries ranging in severity and type.

Concussions are a type of brain injury, as are smaller scale incidents that are sometimes seen as just minor annoyances. Someone “getting their bell rung,” “seeing stars,” or “feeling woozy” are all indications of a potentially more significant problem. Those who have been concussed will also exhibit some or all of the following, depending on the severity of the injury: 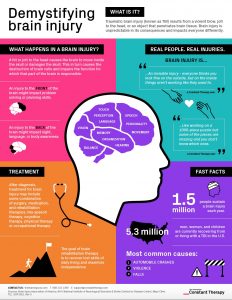 The good news is that many potential accidents are preventable. The key is being aware of the danger and taking the necessary precautions to avoid potentially tragic consequences, a responsibility that needs to be shared by all. Lives can be changed forever by a decision it only takes a split second to make, but there are things that can be done to stack the odds in your favor:

While no one can guarantee that implementing some of the aforementioned safety strategies will prevent every injury, it’s important to take appropriate precautions to reduce the risks.  At Neurology Specialists of Charleston we see many different severity levels and causes of brain injury. It is important to see a specialist if you believe you have experienced a brain injury to begin a treatment plan and get on the path to healing!

What is an EMG?

An EMG, or Electromyography, is a test used to measure the electrical activity of muscles, giving insight to their functionality. Typically used as a diagnostic tool for muscle or movement disorders, EMG tests help doctors pinpoint an area of concern to better develop a treatment plan for their patient.

A nerve conduction study is typically done prior to receiving an EMG test. During this preliminary test, electrodes are placed on the skin to measure how well your motor neurons communicate with your muscles. The EMG is then conducted to reveal possible muscle dysfunction. The test consists of one or more small needles that are inserted into the area in question, however, because there is no medication that is being injected patients experience less discomfort than with typical needles used during a shot. The needles hold electrodes that measure the electrical activity being generated by the muscle which is then displayed on a monitor as a series of waves for your doctor to interpret.

When is an EMG needed?

An EMG is often conducted when an individual is experiencing symptoms of numbness, tingling, weakness, or muscle twitching. The results of an EMG can help to determine whether a person may have a nerve disorder, muscle disorder, or a disorder that is affecting the connection between the muscles and nerves.

What could your results mean?

When resting, muscle tissue should not produce an electrical signal. If this type of irregular signal is registered, this could be a sign of a muscle disorder. During the test, you will be asked to contract the muscle by moving a little bit at a time with gradually increasing intensity. As you contract the muscle, more muscle fibers are activated to produce greater electrical signals. If the test shows abnormal activity when the muscle contracts, that could be a sign of a nerve disorder.

According to your results, your doctor will develop a treatment plan that is right for you.

If you or someone you know suffers from any form of muscular or movement disorder consider making an appointment with Dr. Stickler, as this is his area of specialization!

Epilepsy causes a recurrent, sudden rush of electrical activity in the brain – seizures. This condition affects 65 million people worldwide and educating the population is important to remove stigmas surrounding those with Epilepsy.

Epilepsy can be developed at any age, young or old. The condition can potentially be inherited although this is very slim. In fact, the chances of developing Epilepsy before the age of 20 are only 1% and if one of your parents has Epilepsy then this risk is just slightly elevated to a 2% chance. More often, Epilepsy is brought on by traumatic events that have led to some sort of damage to the brain such as:

Symptoms of Epilepsy and Epileptic Seizures

Myoclonic seizures – random, fast twitching of the arms and legs

Tonic-clonic seizures – stiffness of the body, shaking, loss of bladder or bowel control, and unconsciousness

What Can Trigger a Seizure?

Everyone is different, and different stimuli may trigger seizures for various individuals. A way to figure out what triggers you is to keep a journal and document everything thing about what you were doing at the time of a seizure and the happenings leading up to the event. Some common reported triggers are:

How Epilepsy is Treated

Unfortunately there is no cure for Epilepsy yet, but with the right medication and treatment it can be managed. Medications, neuro-stimulation implants, and even dieting can be effective for treating this condition.

If you suffer from Epilepsy come visit our neurologist, Dr. Myers, as she specializes in seizure disorders and will get you the treatment you need!

What type of headaches does Botox treat?

Botox is used to treat chronic migraines. This means to be an eligible patient for this treatment option, you must experience headaches for at least 15 days out of the month.

As opposed to methods used to treat headaches after onset, Botox prevents headaches from occurring. Botox has been found to reduce headaches by an average of 8 or 9 instances a month.

What to expect with Botox injections:

The injections will be done here in the doctor’s office. It consists of Botox being injected into 7 key areas of the forehead and neck every three months. Like other treatment options it takes time to notice the relief from the Botox, greater relief will be received if the injections are kept up and received every 3 months.

How does Botox help headaches?

Botox injections deliver compounds that prevent contraction of a muscle. By blocking the nerve receptors from reaching these muscles, the muscles are forced to relax and ultimately ease pain and tension.

To learn more about Botox for Migraine or read other frequently asked questions, visit https://www.botoxchronicmigraine.com/botox-faq/

Tell us how we're doing, fill out our survey!

Submit your review
Tweets by @NeurologyChas